One Wicket Win in Last Ball Thriller at Rochester

Well, where to begin?

How about at Elstead? It was speculated that the chase there in the previous game was the most dreary in Mandarins history, falling 50 short with 5 down. Well the archivist says no! I offer you Mandarins v Jesus College Cambridge on 2 May 1981, where we showed our contempt for the Jesus target of 185 by scoring only 71 for 5, including a pointless run out off the last ball. This game, by wonderful contrast, was one of the very best any of us could remember.


Skipper Jonathan wore an enigmatic smile for much of the day. It was as if he, the machiavellian master analyst, knew the result in advance. But it was a roller coaster ride. Mandarins fielded first "by mutual agreement". Hebden and Metcalfe looked worryingly aggressive. Both were cut off in their pomp by Andy H in his pomp. Cracking nip-backers trimming the top of the stumps. Rob bowled superbly at the dangerous Jones and Saunders, finally claiming the latter with another nip-backer, but rueing 2 drops and two misses in the slips.

Despite all of this Kings scored at over 5 an over, and Jonathan feared a target of 250-ish. It was pulled back thanks to much better than average ground fielding (special mention to sweepers Stan Forman and Tim) and three blinding catches by Dan, and Chris Healey, twice. Hursty was niggardly, and the three Formen (if you follow) took a five-for between them. They also caused the only frissance of a mellow day as the oppo scorer found it incomprehensible that three men called Forman could be playing in the same game, and made a minor pitch invasion in protest.

So, a challenging target of 187. Cake-fuelled Baker got us off to a flying start, and Tim and Chris H kept well ahead of the asking rate. There was a suggestion that Tim's pads, whilst exuding their anti-lbw vibrations, were losing their explosive qualities. This was more than made up for by Tim himself very nearly exploding in the changing room when run out for 39. There isn't time to explain. Suffice to say Chris took some responsibility. That was 103 for 2 in the first of the final 20 overs.

The promotion of Eastaway did not come off. Hursty, given #5 responsibility by the Cheshire Cat captain hit trademark blows, some along the ground, but fell at 142. Still, Jonathan and Chris pressed on strongly and we reached 175, needing 13 with 9 overs to go, Chris on 66. With two batsmen of such pedigree, and so many wickets and so much time, what could possibly go wrong?

Well, in a game with many individual moments of excellence, Dom Saunders (also on his way to 4 for 31 with beguiling off spin), made what I rate the finest catch I have seen in Mandarins cricket, sprinting from mid on to wide deep mid wicket and diving full length to snaffle Healey one handed inches from the ground. Thereafter batting became a different proposition altogether.

Skipper (may have been smiling but too far away to confirm) frustratingly (or very cunningly?) didn't get much strike, and watched as Hawkins and the first two Formen fell for a total of two runs. We had scored 5 runs for 4 wickets in 8 overs. 8 required off one over, two wickets left.

Bizarrely, the draw, having been rank outsider for 82 of the game's overs suddenly became hot favourite amongst results. The dangerous Saunders bowled the last over at Jonathan. Two dots. Surely he isn't playing for the draw???  Facial expression impossible to fathom in absence of field glasses. Then a single. Stan Forman on strike. Doesn't know what a draw is. Biff. 4 straight down the ground. 5 th ball, Stan goes for glory, misses and is stumped. One ball left, 3 needed, all fielders on boundary, last man in. Heard. All 4 results possible. Well, Jonathan had orchestrated it all the way along, I can't help thinking. Andy swipes/smears/drives/wibbles/edges (delete as applicable) into the only large gap on the field at third man, and they complete the three needed for victory. 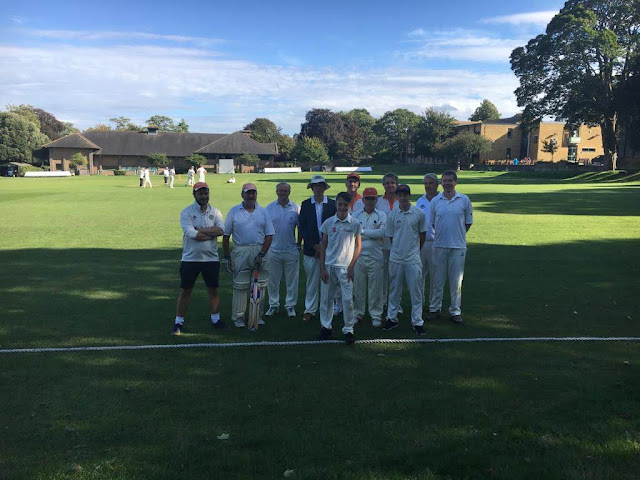 (need some work on the lighting next time - Ed.)