A cricket match on Easter Sunday leaves your match reporter with few easy angles to exploit for cheap laughs. If only there was a topically seasonal way of describing a batsman who a bowler has a habit of getting out. How I wish there was some kind of relevant bit in the bible to parse when describing a batsman who is invited a back for a second chance having been cruelly treated in his first life by a man who he thought was a friend. Or at tea, when 12 men were sat around a groaning table listening intently to their leader and considering the hours ahead, what if there was an image could I conjure in the reader's mind?

In the absence of such, you shall have to make do with a literally prosaic description of the events of April 21st 2019, but what events they were and always are when the Mandarins meet the Superstars. Even two testaments would never be enough to do them justice.

We were gathered there that day to celebrate the life of a bearded Jewish man, around 40 years old, who, it might be said, was definitely not the messiah but a very naughty bowler. While not the son of God, he had placed a son on each side of the game and used his powers not to turn water into wine (although plenty of that was to be taken later) but the miracle of stitching up a toss a week in advance so that he could bowl first on a tacky April pitch and then spend more time drinking and drinking in the unseasonably glorious sunshine that glistened like the golden foil on... no, nothing. Oh if there was just some kind of popular confectionery product at this time of year.

Superstars openers Spencer-Bickle (24) and Gaught (15) started well with an opening partnership of 40, surviving the testing seam and swing of Eastaway, Heard and Forman (H) and offering a few heavy blows down the ground (although Spencer-Bickle was fortunate that the bearded Jewish man was blinded by the light when offering a simple skier). But the openers also seemed to doubt their leader's instruction to hurry up, for they did not believe that their captain had seen this slow tricky wicket for himself. Their doubt caused confusion, to attack Chris(tian) Healey or not? Healey himself (5-1-16-2) was full, of length and belief. Both openers were out, of the innings, and of faith in their skipper forevermore.

Their captain caused further confusion and damage with his trademark running (people out) between the wickets. One such innocent was Superstars debutant Holroyd, not even afforded a chance to state his case when run out by Gigg without facing. Meanwhile the spinners were on the march, with the bearded Jewish man (6-0-14-3) and his guide and mentor McIntyre (5-0-2-16) running amok among the middle order. The Mandarins' leader then dispensed gifts to all of his acolytes, using 10 bowlers in total.

The 11th Superstars wicket (Holroyd in his second life, this time running himself out) really was the final nail on the? on the?... no, still nothing comes to mind. Anyway, it was time for an excellent tea thanks to our obliging hosts at Streatham and Marlborough CC, including small chocolate ovals for those lucky enough to have found them and some mildly spiced buns with a chequered white pattern laid across the top. No idea why they only appeared for this fixture, but tasty nonetheless.

Comeback from the dead analogies are, well, perhaps a bit bad taste and, frankly, a Superstars comeback was never close to the cards, let alone on them once the Mandarins innings was given a firm footing with a steady third wicket partnership of 58 between Eastaway (24) and Wilmot (33*) after the threatening Forman (S) (9-3-19-1) had been seen off. Venky, despite at least 40 days and 40 sleepless nights with his newborn twins, then showed us the true way of batting life on this pitch, with a breezy 10* that made everyone else's more painful efforts look like mere mortals and took the Mandarins past the target with several overs and wickets to spare. 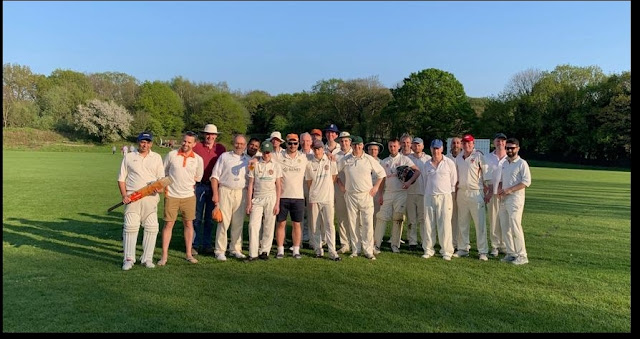 But though the Superstars were not the resurrection, some were the life of the after party at least. And though they died on the pitch, they lived in clubhouse, where curry was consumed courtesy of the bearded Jewish man and his Muslim friends at the Mirash Tandoori, for this was a day of peace among all men, despite a few controversial LBW (umpire Baxter) and run out (umpire Hemingway) calls. And though the two teams eventually parted, for all good things must pass, they will meet again in Heaven, or at least at Abbey Rec in South Wimbledon (and where else is Heaven really?) for a twenty20 in July. Perhaps some helpful analogies will have come to mind by then.