FORMAN HEROICS IN VAIN AS MANDARINS FLUNK TEST OF HISTORY

Thanks to Dan we got this bonus fixture against yet another configuration of the Streatham and Marlborough club. The Midweek version is as competitive as the others, although they had to resort to using a first team league player to beat us by the narrowest of margins.

It was a bit of a polyglot Mandarins outfit with representation from SMCC ( other chapters), Heber and Superstars augmenting the usual suspects. We stuck to our task in the field. Special mentions for Jez Lloyd's hostile opening spell, Stan (sparing himself a little to keep something back for his 400 metres in the evening, but still economical) and Timbo, showing Baker how to bowl proper loopy leg spin. Tim was also stand out fielder, spending much of the afternoon dynamically horizontal making saves at cover, as Graeme patrolled cow corner at both ends, and cemented his 2020 top catcher slot with another excellent grab towards the end. S&M openers Kularatna and Henly were excellent in all departments except running. This being the Mandarins we spurned about 5 chances in a variety of bizarre ways before they finally took us on once too often, but the century partnership threatened to be the foundation of a vast score. It wasn't as we continued to field above the usual standard, and Captain Dan bowled a crucial tight spell towards the end, earning two scalps.

Mandarins set about the target with purpose, albeit losing Graeme to a good one and Matt Conway temporarily with a wrenched foot. Harry Forman, fresh from school and a second half sub for Stan the runner, now underlined his growing all-rounder credentials. Big partnerships with Faizan Haider and Jules Lowin were crowned with Harry's maiden 50 (I will stick my neck out and say youngest player to achieve this milestone for the club.)

Trouble is, Harry hasn't played for us long enough to appreciate the Mandarin capacity for self-destruction. So, he carried us to 188 for 3 off 31 and departed for 57 smiling broadly and assuming it was job done. Noah Dodds had other ideas. He roared in to take 4 for 14 (although the two given out caught behind still say they didn't hit it). We battled through to 216 for 4 in the 35th, still looking favourites, 12 needed off 5 and a bit with 6 wickets in hand. But, in scenes reminiscent of the carnage that always seemed to happen at Great Tew in the 1980s when we often achieved similar winning positions only to throw them away, on this day we lost six for 8. In the 1,072 games for which records survive Mandarins have never successfully chased such a large target ( the record is 225 at Rochester in 2016). So close, but the weight of history proved too great. 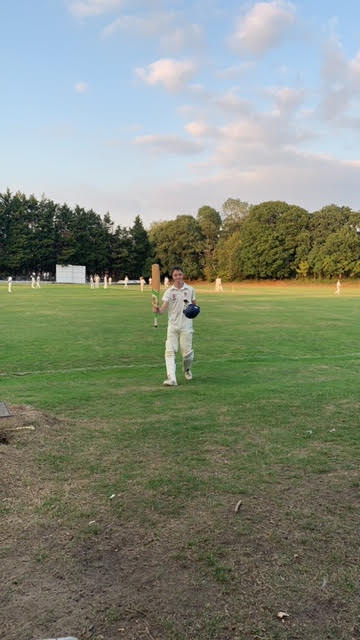