Yesterday was the second time in two weeks that I've encountered the Reading University Staff team. Last time, a handy Whitchurch-on-Thames side - who've won about as many this year as Mandarins have lost - were comfortably defeated in a match that, incidentally, almost came to blows. So I wasn't that hopeful as I arrived at the pleasingly situated Ipsden ground, situated in the Chiltern Hills. 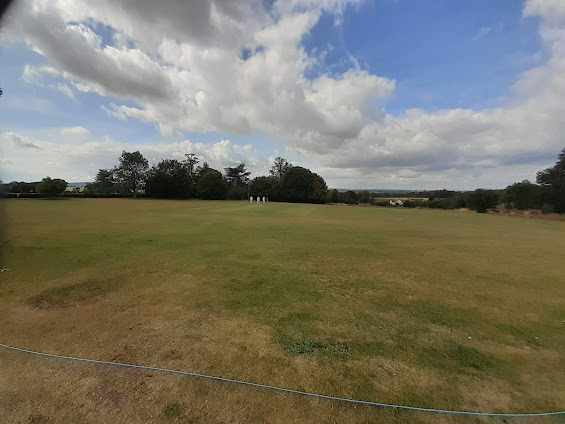 You can't tell from here, but despite its bucolic location and cosy pavilion, the pitch itself speaks of the farmland from which it had obviously once been hewn. One delivery might clang against your helmet, whilst the second will bruise your ankles. Though to be accurate, most of us weren't in for long enough to get a personal experience. Fielding in the deep was no easier, with unexpected undulations near the boundary allowing the ball rolling towards you to leap suddenly over your shoulder.

With 15-minutes to go, Reading had barely a handful of players on the ground; and fears of an administrative error ("they do know it's Saturday, right"?) were likely to be our best hope of some kind of victory. In the end, 13 players turned up, and the chosen format was the usual-for-these-parts of 35-overs a side. Reading went in to bat first.

The innings started aggressively, with boundaries - fours and sixes - being struck regularly. Yet the Mandarins supporters' hopes were raised by wickets falling at regular intervals. We had them five wickets down with only 73 runs on the board. Stan Forman and John Porter each collected three, with Harry and Dan chipping in one each.

Notable dismissals included Paul McIntyre and Dan Forman both converging on the same skied catch, both shouting "MINE!" - let's face it, the shout is usually "YOURS!" - before Dan managed to collect the ball, shoving Paul out of the way. So many surprises in that incident. Later, in similar circumstances, JP and David Williams managed neither of them to get near the ball, thus demonstrating reversion-to-the-mean.

I should not forget to mention two run-outs in identical format - Stan Forman at point to David Williams as keeper - and to highlight that the three Formans were involved in 8 of the 10 dismissals. Yes, we did dismiss them all in the end, but not until the last over and not before they'd scored 251.

After a very good tea of barbecued meats, Harry and Drew went in to try and chase this mammoth score. Harry played with great confidence and was able to farm regular runs. However, his 33 proved to be more than half of the 65 runs scored off the bat. Nobody else reached double figures, and had it not been for 31 extras, the outcome for us would have been truly dismal.

It was good to see Ollie Gardiner make a cameo performance (his 6 was third top score), and I include this picture if only to prompt future readers to wonder what can possibly be going on here. 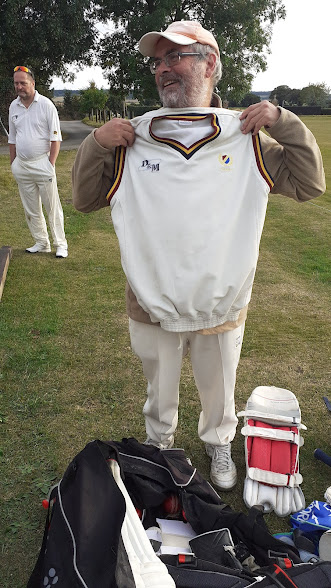