In these uncertain times there are few things you can still rely on. But you can be confident that the traditional opening fixture of the season at Peper Harrow is a two sweater game played in intermittent driving sleet on a soggy green pitch. The Mandarins can’t really play the 40 over game. Chasing anything much over 120 is always a challenge (as indeed is chasing anything much under 120). And rarely are 11 players at the ground on time, with Jonathan the most reliably late. 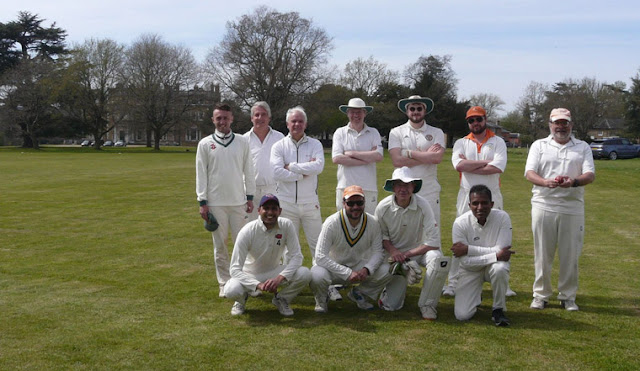 45 minutes before the start time a full team of Mandarins packed with wicket-keepers, team photographer Chris Healey and Rakesh’s noisy fan club (partner, sister, brother-in-law, niece and Lexi the dog) were ready to go (though it would be some time before the first opposition member strolled in). The sun was blazing down and the pavilion clock’s thermometer read 38 degrees centigrade or just over 100 in old money. Jonathan managed the toss and we bowled. The Mandarins slathered themselves in sun block.

It was clear from the start that Peper Harrow had a long and strong batting line-up. With their first league games not due until the following weekend, several of their better players were keen to get their eye in. The pitch was more like those we find in August and September in a good year: firm with good bounce and carry. Anything dropped short was dispatched to the boundary. Opening bowlers Eastaway and Owen Jackson just about kept the lid on things with Rob’s rhythm improving over by over. An excellent steepling catch by Rakesh removed the dangerous Ghani. But after ten overs Peper Harrow had moved to 53 for 1.  The introduction of spin proved crucial in putting on the brakes with Dan in particular bowling well. But the key moment was a brilliant run out by Owen of the highly dangerous looking big-hitter Spooner who had driven his first ball far into a neighbouring field. However, the classy Faisal held the Peper Harrow innings together and others chipped in. They were heading for over 200 despite decent bowling from all the Mandarin spinners (a special mention for Chris Baker twirling away effectively despite hobbling a little after taking a fearsome drive on his shin) until the returning Jackson bowled Faisal for 54 and then with Manian cleared up the tail to leave Peper Harrow all out one ball into the 37th over on 194. Mandarin ground fielding was uniformly excellent in the face of some aggressive hitting. It was one of those days when all the chances offered were tough ones, many on the boundary. Some good ones were taken (Ramani, Warren, McKeon) and others just missed.  The wickets were shared around pretty evenly.

After a relaxing tea (not perhaps legendary in terms of content but a pleasure all the same), Dave Williams and George Warren strode out to the middle. The Peper Harrow opening bowlers were a mixed bag. Dave and George punished the bad balls, especially the shorter ones and Johnny Extras got off to a flyer. After 9 overs we were 63 without loss and well ahead of the rate. Chris Baker started talking of the best ever Mandarin 10 wicket win although Chris Healey more realistically claimed that Winviz still had a Mandarin victory at 8%. Dave promptly missed a straight one and was LBW for a very good 20. But George, Jonathan and Arvind kept the total moving. There was a moment of real controversy when Peper Harrow thought they had Jonathan caught behind. But umpire Baker was not to be persuaded and Jonathan went on to hit several classy drives. With contributions from Rakesh and Chris McKeon we moved to 131 for 4 off 25 overs. But then Peper Harrow brought on Spooner who turned out to be a fast bowler as well as a big hitting bat. Soon we were 137 for 8 with Owen, Chris Baker and your correspondent failing to trouble the scorers. But cometh the hour cometh the man. Rob wearing a borrowed helmet unfurled a series of classy cuts and drives and with an increasingly aggressive Arvind took us to the brink of victory with 5 needed off the last two overs. But then the inevitable.... Rob missed a straight one and was gone for 27. Dan strode out having announced to the crowd that his role was to leave things to Arvind and duly played out the rest of a maiden over. But there was to be no further twist: Arvind justified Dan’s confidence and hit two classy shots off the returning Spooner and the first victory of the season was secured. Johnny Extras top scored with 41, closely followed by Arvind with 38* and George with 32.

So a near perfect start to the season all round.

ps. Rob Eastaway would like to add "that the scoreboard thermometer was playing up all match, but the temperature did probably make it to 20C and at the start of the game no Mandarin sweaters were in view."